Sand casting is an efficient and economical process of producing geometrically complex components and shapes using non-reusable molds. It is an efficient and cost-effective method that is often plagued by defects when improperly done, just like with any other manufacturing process. Its flaws are called casting defects.

Casting defects are characteristics that create an imperfection or deficiency to the quality specification set by service requirement and design. They are usually caused by imperfections in the sand-casting process and sand used for mold preparation.

Below are some of the common casting defects in the sand-casting process.

This is perhaps the most common defect in the sand-casting process. Generally, blow-holes are usually in the form of internal voids, which may be round, smooth, or oval holes with a shiny surface. They are surface depressions resulting from excessive gaseous materials which are entrapped in the mold. It may also be caused by core-box arrangements and bad patterns, ultimately leading to entrapped gases in blind places in the mold. 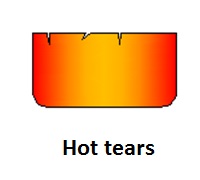 In some cases, excessive mold hardness from ramming, improper metallurgical and pouring temperature controls, provision of insufficient fillets or brackets at the junctions of sections, and high dry and hot strength have been identified as possible causes.

This is an external defect usually visible at the surface of the cast material. It comprises of a host of cavities close to each other at the surface. It is attributed to dirt trapped in the molten iron or swarm held in it. It can also be caused by the poor quality of the molten metal and imperfect skimming. As the name suggests, they are developed as a result of impurities collected at one or several vertices developed in the cast material. They appear as irregularly shaped depression usually clustered on the casting or spaced randomly.

They occur when the molten iron washes particles from the runner system through the mold walls, excess turbulence in the gating system, through the spurting of metal and into the mold.

Sand spots can be prevented by making use of proper molding, melting, and gating techniques.

Scabs or buckles can be attributed to sand shearing at the cope surface, hence, resulting in a layer of metal being separated from the main cast by a layer of sand.

The defect is mostly caused by the use of sands that are too fine in texture, have low permeability and high moisture. As with other casting errors, it is also caused by an uneven ramming of the mold and weak or intermittent running of molten metal over the surface.

If that be the case, using sand with high hot plasticity or low expansion characteristics would usually produce cast materials without scabs or buckles.

Usually, coal dust would suffice as it has been shown to produce cast materials without expansion defects, one of which is scabs. A rat tail is an expansion defect visible on the cast surface. It is a long, shallow, and angular depression that has a little semblance with a buckle. However, it is distinct from a buckle in that it is not shaped like a broad vee. Just like scabs and buckles, it is caused by using casting sands with low expansion characteristics and high hot plasticity.

The use of coal dust sands does a great job of eliminating such defects. The same cannot be said of green or fresh sands. Although improved sands such as Petrobond sand promises to eliminate these expansion defects, it fails to produce better results than what is obtained when coal dust is used as facing sand. If you cannot find a coal dust supplier or vendor, foundry coal dust is a good alternative.

These are tiny holes of about 2mm in size, which are visible on the surface of some cast materials. It results from the dissolution of hydrogen gases in the molten iron. When molten metal is poured into the mold, it begins to solidify. As the solidifying process begins, the solubility of the hydrogen decreases, leaving the molten metal to escape and leave behind a small number of holes referred to as pinholes.

It is known to be caused by the use of sands with high moisture content, absorption of hydrogen or carbon monoxide by molten metal or pouring of steel from wet ladles or ladles that are not sufficiently gasified.

To avoid pinholes, good melting practices should be employed. Also, sands with reduced moisture content and increased permeability should be used in the casting process. Rapid rates of solidification are also preferred. For this cause, chrome sand is highly recommended. It is ideal for castings that require fast cooling, high thermal conductivity, and can withstand high heat intensities. Indeed, its melting point is put at around 2150ºC.

This defect appears as a straight junction line on the surface of the cast material when the molten iron is poured into the mold from two gates, and both streams of molten metal meet at a point with low temperatures. They do not fuse and hence create a cold shut at this junction. It is this cold shut that appears as a crack with a round edge at the surface of the cast. 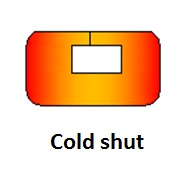 To eliminate such defects, the optimum pouring temperature and a proper gating system should be adopted.

This defect occurs when there is a cracking on the upper surface of the sand mold, and sand pieces from it fall into the molten metal to be cast.

It is caused by soft ramming and in some cases, by sands with low strengths. Additionally, drops may also be triggered by insufficient reinforcement of sand projections in the cope and insufficient fluxing of molten metal. Fluxing is usually done to remove impurities from metals.

To minimize the occurrence of this defect, casting sands with high strength should be used, and proper ramming practices adopted. There should also be adequate reinforcement of the sand projections in the cope.

This defect appears as an uneven and rough surface of the casting. When large sand grains are used, the molten iron fuses into the sand and solidifies, producing what is known as metal penetration defect. This defect can be eliminated by using sands of smaller grain size, low permeability, and high strength.

This casting defect is prevalent in sand casting processes where inappropriate temperatures are used. When molten iron poured into a sand mold solidifies before reaching into the corners of the mold, it leaves spaces in the mold referred to as a misrun. 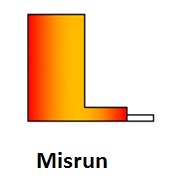 It can be prevented by increasing the pouring temperature of the molten metal, which in turn increases its fluidity. An improved gating system and the use sections which aren’t too thin can reduce the occurrence of misruns. Sand holes is a common occurrence in foundry industries that use sands with low strengths like it is with some green sands.

Sand holes occur when loose sand particles wash into the mold and fuse into the interior of the casting resulting in some holes created on the inside of the cast. In some extreme cases, sand holes are also seen on the external surface.

Major causes of these defects are very loose ramming of sand, rapid pouring of molten metal into the mold, resulting in the washing away of sand into the mold or poor cleaning of the mold cavity.

To avoid sand holes, the mold cavity should be cleaned appropriately, and the sand properly rammed. Care should also be taken when pouring the molten metal into the mold.

For the most part, the above-discussed sand defects are mainly caused by poor casting processes. While some are caused by soft ramming, others are chiefly due to the use of poor pouring and molten metal temperatures.

However, a common cause of the above defects is the use of casting sands with reduced permeability, strength and high moisture content. This highlights the importance of using appropriate sands in the sand casting processes.

While some green sands and dry sands stand out in strength, they do not satisfy all requirements of good casting sand. Green sands, in particular, have issues with permeability and resistance to tensile stresses. On the other hand, chrome sand and coal dust are excellent for sand casting processes. With their optimal strength characteristics alongside good permeability and plasticity, they significantly reduce the chances of casing defects occurring.

Chrome sand is arguably the best casting sand for processes that require very high temperatures, and consequently, reduce the probability of several common casting defects that are associated with high temperatures. vamtam-theme-circle-post
 Category Foundry
Although, Petrobond and clay dust sands share several properties in common, coal dust according to a recent study has been shown to possess some characteristics that gives it an upper hand in a casting process.
Read More